Fear And Loathing Under The Podium

A friend recently asked how I would describe my work at The Plutopia News Network.

My first response was “Noise Maker”. Much of my time is spent in my studio, recording and editing our interviews. Most of the interviews are conducted in the PNN “Virtual Studio”, our term for online interview sessions with our guests.

In recent months, I have ventured out of the virtual studio into the “real world”. In my early years as a broadcast journalist my favorite thing was field reporting, lugging a tape recorder and microphone to press conferences, large public events and face to face interviews. Like most of my peers, I learned field reporting the old fashioned way. The news director tossed me a little reel to reel recorder, told me what he wanted and when he wanted it. My first remote was interviewing the local fire chief as his new fire engine was unloaded from a train. I conducted a fairly normal interview, despite being terrified that I was going to blow the assignment. It was a real confidence builder. I enjoyed being out of the newsroom, pretending I was “the next Dan Rather” (the patron saint of all Texas radio reporters). That delusion was shattered when I finally got a major event assignment.

One of the NASA astronauts was scheduled to address a large gathering in Odessa, Texas. 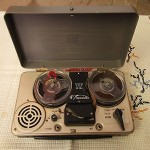 The news director tossed me a little battery operated recorder and an address. How difficult can this assignment be? Upon arrival at the venue, I found the answer was…very! My recorder was one of those cheap, plastic reel to reel portables. The microphone was wired directly into the recorder with a six-foot cable. The astronaut was speaking from a podium on a raised platform. The camera crews from area TV stations had long cables for their mics. There was no way my short microphone cable was going to reach the podium! I sat behind the speaker’s platform, contemplating my impending doom. Were news directors allowed to execute reporters who failed their assignment? I looked behind the skirting that covered the platform. The platform had a small crawl space that led to an open area beneath the podium.  In a moment of uncharacteristic inspiration, I pushed the little microphone through a gap in the platform skirting and was barely able to reach the podium. A sympathetic TV cameraman strapped my little microphone to his stand. I was in business…sort of. Under the platform, my recorder was dangling in mid-air, supported only by the microphone cable. I never actually saw the astronaut, whose name escapes 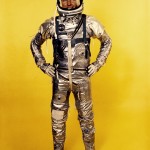 me. I spent the entire speech under the platform, holding the recorder and swapping tape reels when the tape ran out. After what seemed an eternity, the speech was over and I crawled from under the platform soaked in sweat, clutching my bag of tape reels. The TV camera guy helped me retrieve the microphone.  I started to apologize for my less than professional gear. He stopped me, saying “Don’t worry about it young man. You got the story. In this business, that’s all that matters. You found a great solution to a tough problem.” I entered that arena as a scared rookie reporter. I left as a more confident rookie reporter. I wasn’t the “next Dan Rather” but I was, at least, the next Scoop Sweeney.